Francis Welles, one of the men assigned by Mr Lea to set up the school was also a man of some financial means. He put money into the set up of some of the school’s limited facilities at the time and had a particular interest in games. At a time where children’s education often had to be paid for by donations of local people, Welles also left a sum of money in his Will to be split between the school itself and to the local poor. A scholarship was set up in his name for students who had a particular aptitude for games. His surname was also given to the one of the modern day Houses of Sandbach School. 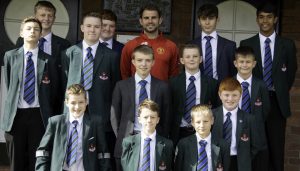